The next task was fixing the motherboard tray in place. From the guides I have seen, many people used JB Weld to fix the old mounting posts into new positions.  However this is not available in the UK so I continued without it for now. Note that the motherboard mounting posts of 2 different heights for some reason. I removed all of the taller posts (by gripping them with pliers and with a little force they break away from the case) and left all the shorter ones in place.

The difficulty was working out where I needed to drill the holes through the motherboard tray to line up the mounting posts that were left. To do this I covered the back of the tray in a couple of layers of masking tape, put the tray in position and pressed down where I thought the mounting posts were. This left small rings imprinted in the surface of the tape, so I knew exactly where to drill.

This worked pretty well, only 1 post was horrendously out of position so I had to re-drill this hole. This wasn’t really a problem seeing as the tray would be hidden beneath the motherboard. I managed to use 10 of the existing mounting posts and as it turned out these were quite sturdy and so no screws were required on the back of the tray to hold it to the back of the case. This was a bonus as I really didn’t want the back of the case to look too messy. 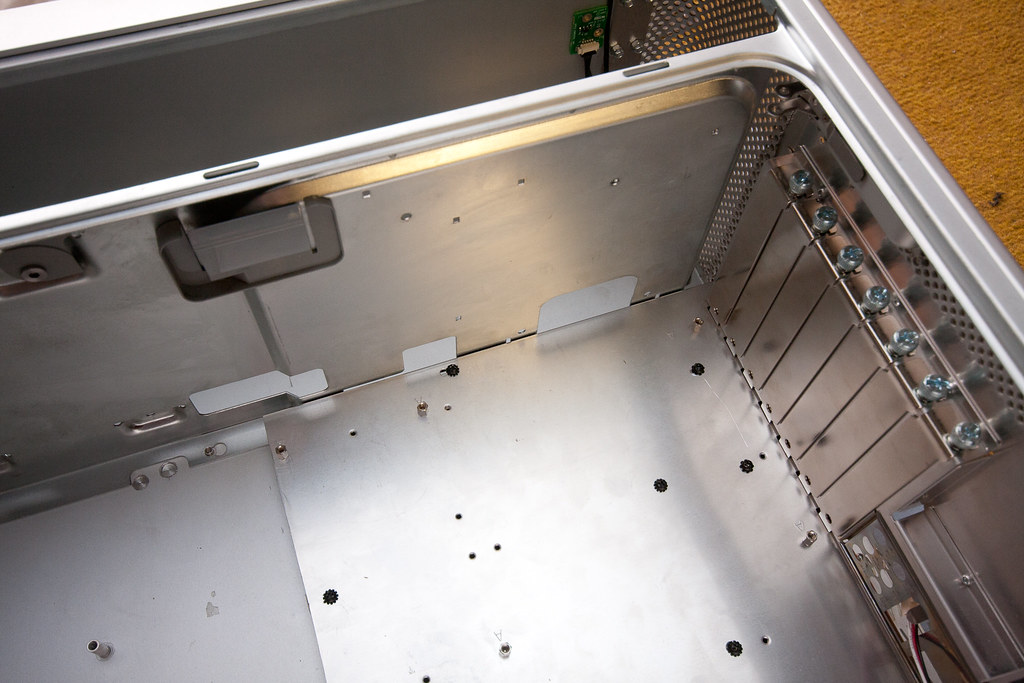 Now that the power supply would be above the top shelf and out the way, I could decide where I wanted to mount the motherboard tray. Because the tray I chose was ATX, it was quite tall. So tall in fact that if I mounted it as high as it will go, it only just avoided the start of the curvature of the bottom edge of the case.

After some Photoshop work, the area that needed to be removed from the back of the case was cut and the tray slid in a treat. The corner of the tray was also cut so that the leave to open the case could be accessed. The fit was so good, the top edge of the tray was flush with the top shelf. 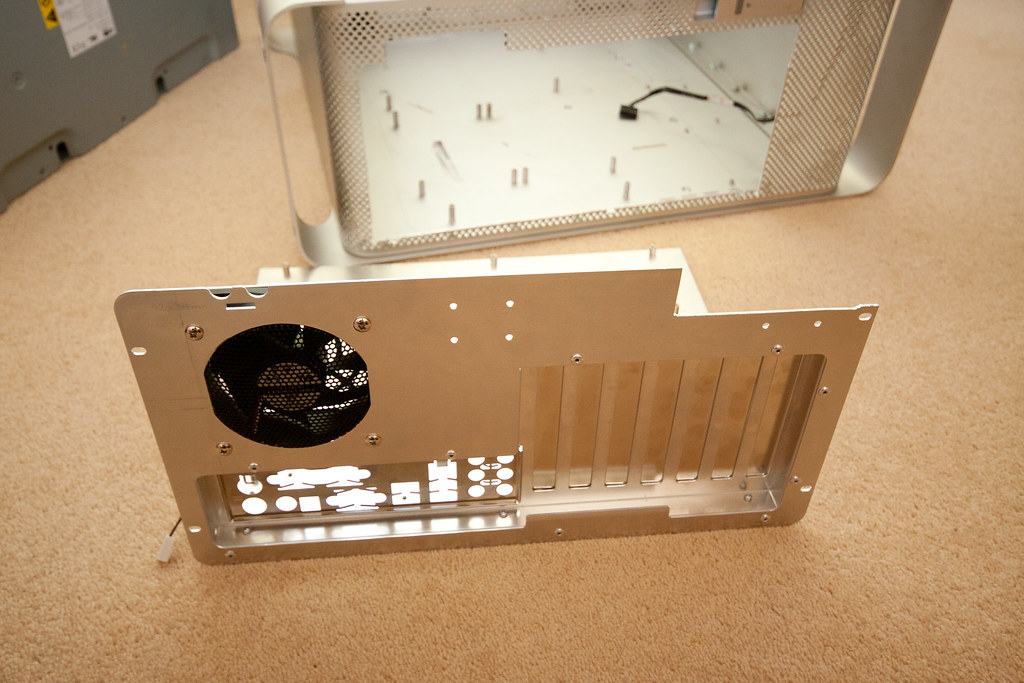 The biggest decision in the case mod is deciding where to mount the power supply. There were 3 possibilities I would consider.

Another issue is the size of the motherboard tray. The ATX tray I have is quite wide (from the front to the back of the case) so moving it up or down may not be that easy if it hits the optical drive for example.
In the end I decided I would mount the power supply in the top as it seemed the best use of space, leaving a large space in the case for hard drives. 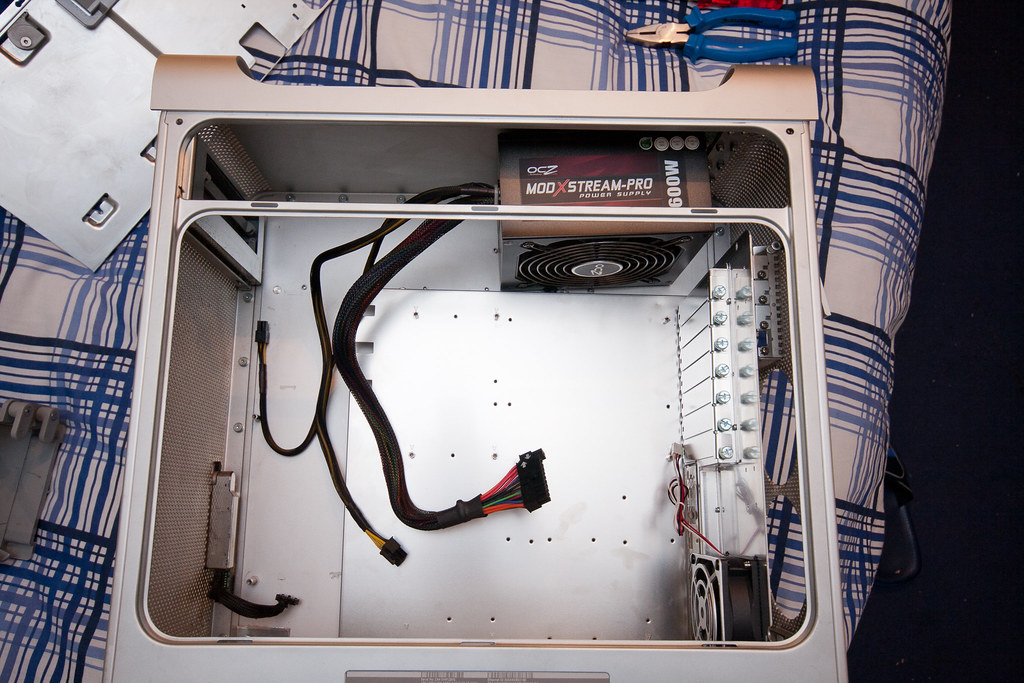 This was the first time I’ve had a look inside a computer PSU so didn’t really know what to expect. What I found was tonnes and tonnes of dust. On the front of the case were 2 small fans that suck air through the PSU and out the back of the case. However there isn’t a filter on the front and the fans are right at the bottom of the case, so a fair amount of dust from the floor is sucked in.
After sticking a hoover through it and removing the circuit board, and could have a guess at whether the PSU I had would fit in this case. 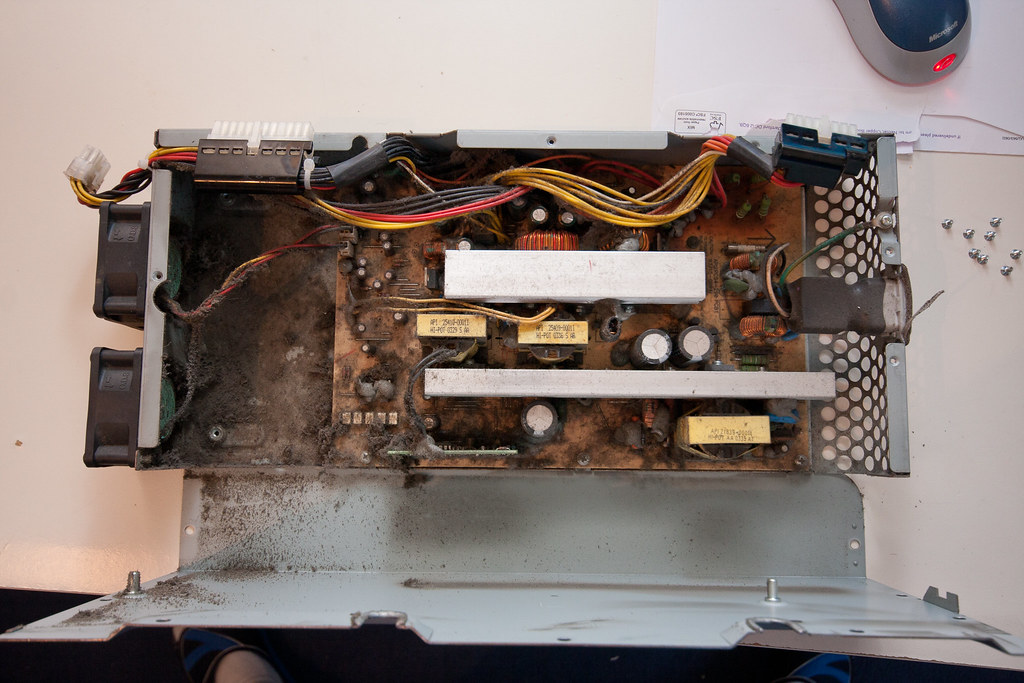 There was quite a lot of dust in the case. Some of which has dried on due to the coffee spillage. After a hoover and a spray of some metal cleaner, the inside of the case was shiny again and looked new. You can now see the motherboard mounting posts which I tried to reuse. 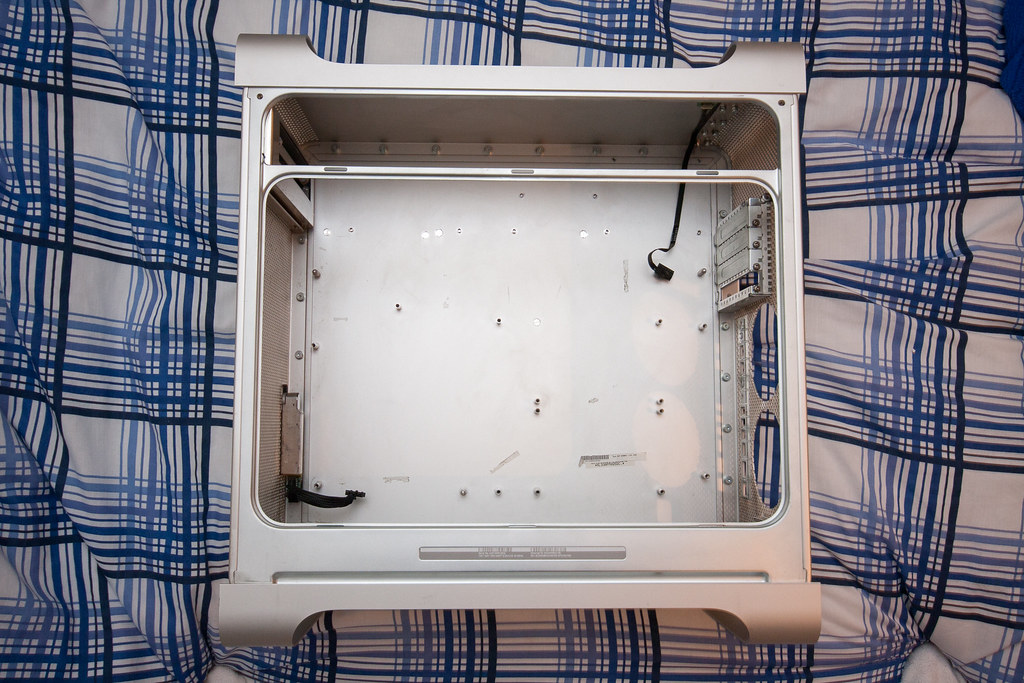 After a trip to Toolstation for a long handled screwdriver I could remove the hard drive cage and fan. However the cage was too large to slide out the side of the case, so next up was removing the top shelf that supports the hard drive cage and optical drive.
The shelf was held in neatly, however it also contained the lock for the side panel which tricky to remove and felt quite flimsy. Care had to be taken not to snap it. Once this was out the shelf rotated out and out came the hard drive cage.

All that was left to remove were the cables that were clipped down diagonally across the back of the case which were held in place with double sided tape. 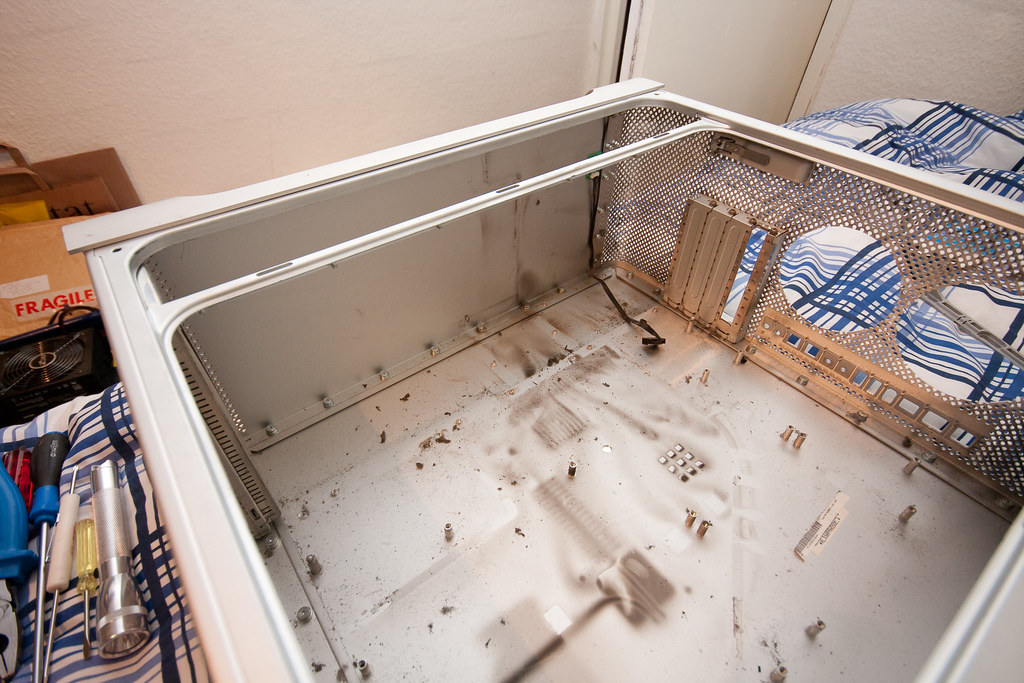 The first challenge was removing all the Apple parts in the case. Some parts were held in in very weird and peculiar ways. All the screws were different for each component, which made it a pain to remove some parts. Most screw heads were Phillips, but some had Hex and Torx heads which luckily and I had the right size screw bits.

The first parts to come out were the CPU heatsink and fan. The heatsink was heavy and absolutely massive. I could now see all the screws holding the motherboard in place. There were a few cables to disconnect for the power, front IO, fans and hard drives, once these were removed the motherboard lifted out relatively easily.

I then hit a problem in that I couldn’t reach some screws that held the hard drive cage in place. 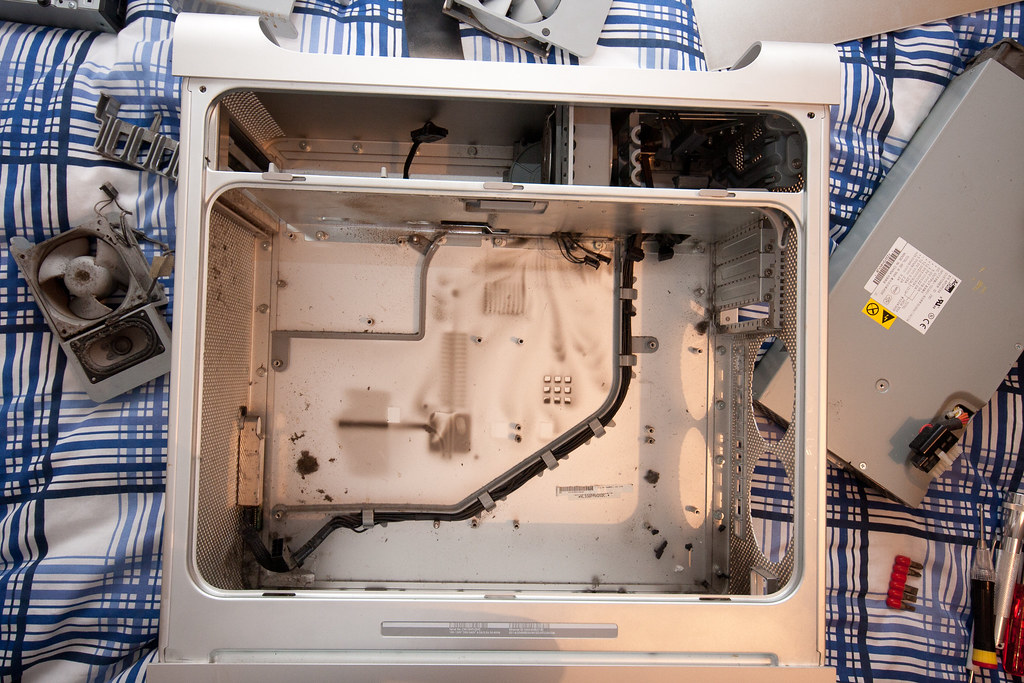 The next thing I needed was a motherboard tray. A PowerMac motherboard is not ATX or any other standard you have heard of and so the screw mounts for the motherboard would be in completely the wrong places. Furthermore, the back IO ports and PCI slots were wrong as well.

Therefore a motherboard tray would be needed. The choice was ATX or mATX. Hours were spent on forums looking at other peoples builds and seeing how ATX and mATX fit inside the case with all the other parts such as power supply and hard drives in different places.

In the end I opted for ATX, since the motherboards are more common and offer better upgradability. I could only find 1 online store in the UK that sold a tray. Kustom PC’s sold a Lian Li tray for £27 and £7 postage. There was only 1 in stock so I had to buy it.

I also wanted an ATX motherboard which I could mount to the try for testing. I headed over to eBay and found an Asus one for £10 that may or may not have been working. 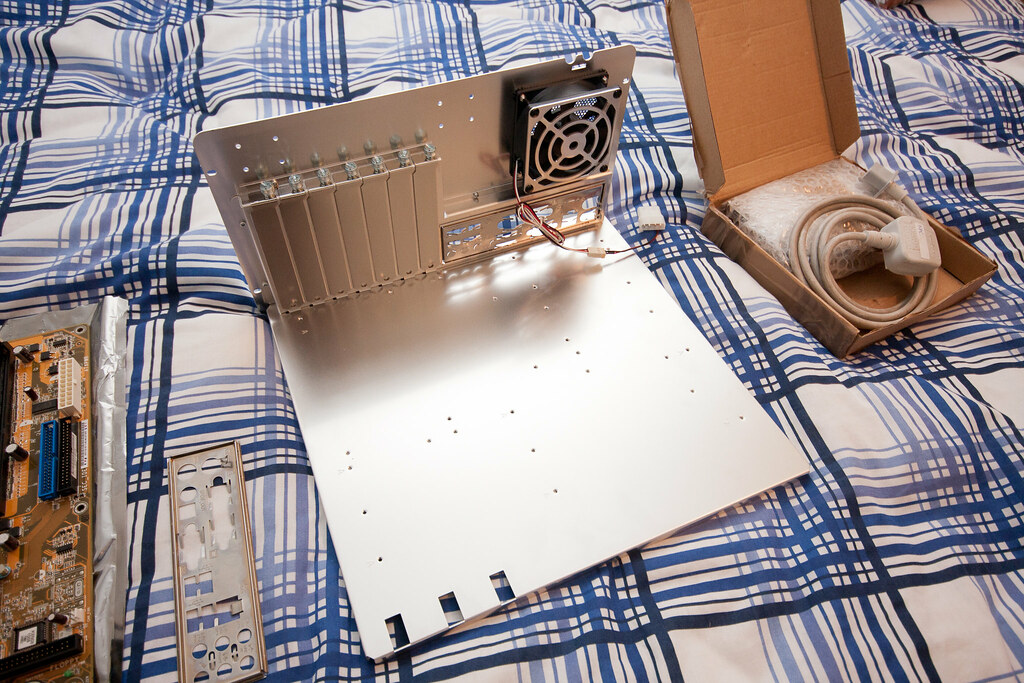 The first task was to find a case. This was quite difficult so I headed over to eBay. Mac Pro cases didn’t really come up at all, but there were a fair few PowerMac’s from a few years ago. Some were being sold complete and working and others for spares and repair. However all I was interested in was the case, and finding one in good condition was tough with the size of eBay photos and whether what the seller thought was good condition, was actually good condition. Postage was another issue. These cases weigh the best part of 20KG and postage costs are quite high. Some people don’t offer to post at all.

After a couple of weeks I found a Buy It Now for a 1.6GHZ single core PowerMac, complete apart from RAM. It was sold for spares as someone poured coffee in it. For £50 this was a steal, postage was £20 but didn’t matter. Others seemed to be selling for £200+. 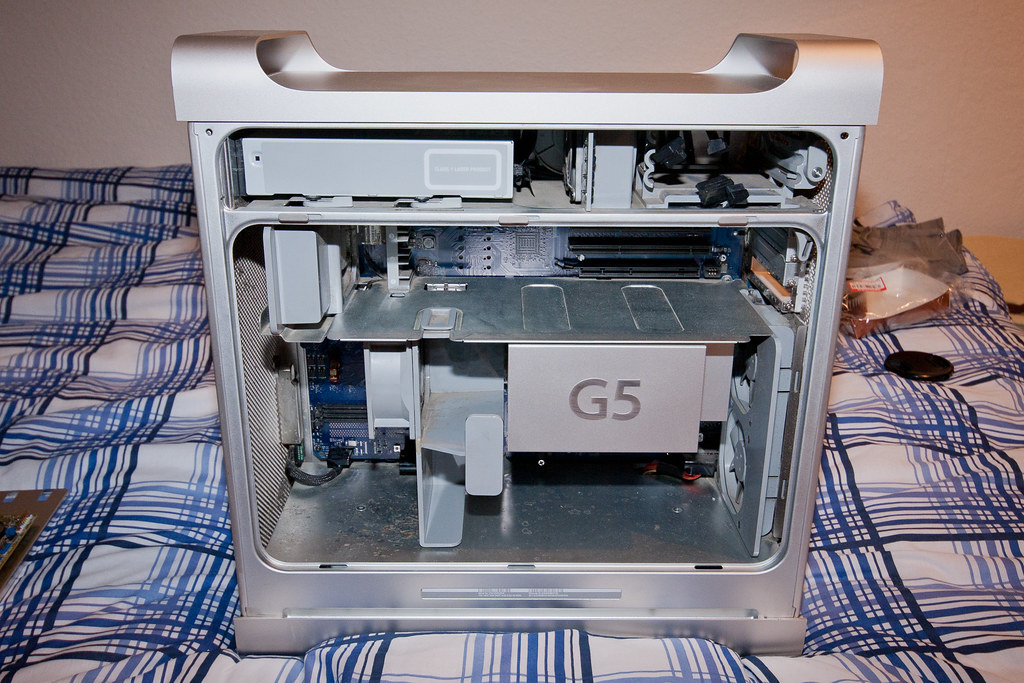 Over the summer I had an internship working at the University of Bristol and so I thought I’d give myself a small project to carry out in my spare time. After looking around on forums and finding it had been done many times before, I thought I’d have a go at converting a PowerMac / Mac Pro case for use with standard ATX parts.

However, from what I had seen of previous conversions, some jobs were pretty messy. My main aim was keeping the case tidy from the outside, with no unnecessary garish screw heads or rivets for example.

Throughout the project I took photos of each stage, which you can find here. I may host these elsewhere if there are issues viewing them.

Each day for the next 15 days I will post the next section of the build, in the order I carried them out in, and I’ll close with some final remarks of the project. 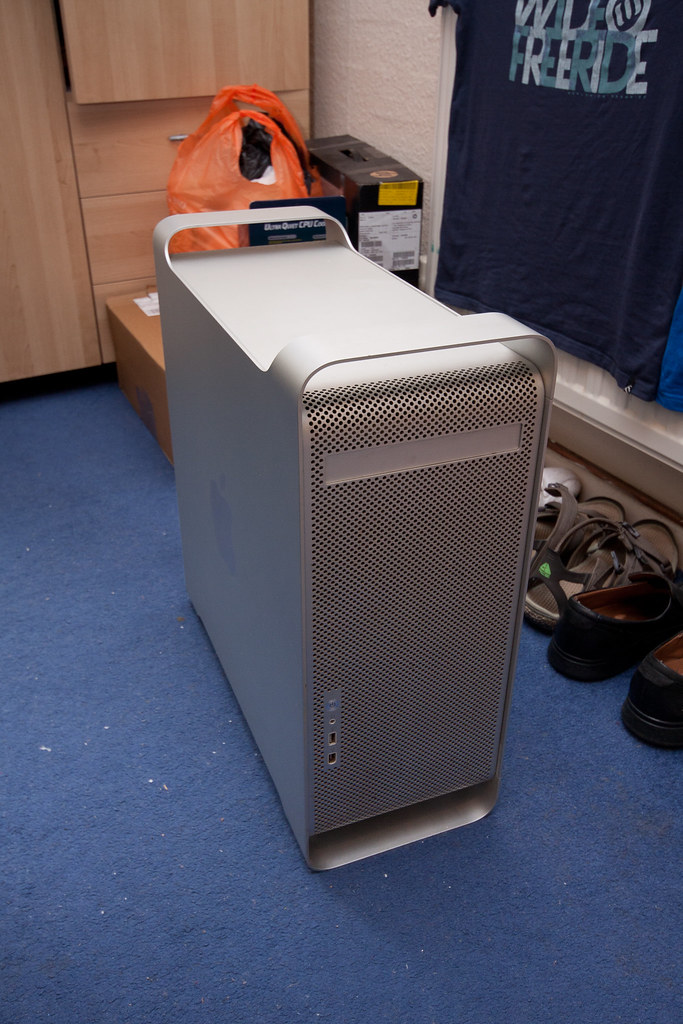 After the success of the University of Bristol Netball Club Calendar last year, I was invited to shoot the READ International calendar for 2012. The aim was to raise money for the book charity by selling the calendars to the students of Bristol.

The calendar contains many different societies:
Each society shown doing what they do in all their glory.

Here is an previously unpublished shot of Computer Science:

More information about the calendar and READ International can be found on the READ Bristol Facebook Group or by emailing bristol@readbookproject.org.uk.
Posted by Alex Sheppard at 02:01 No comments: